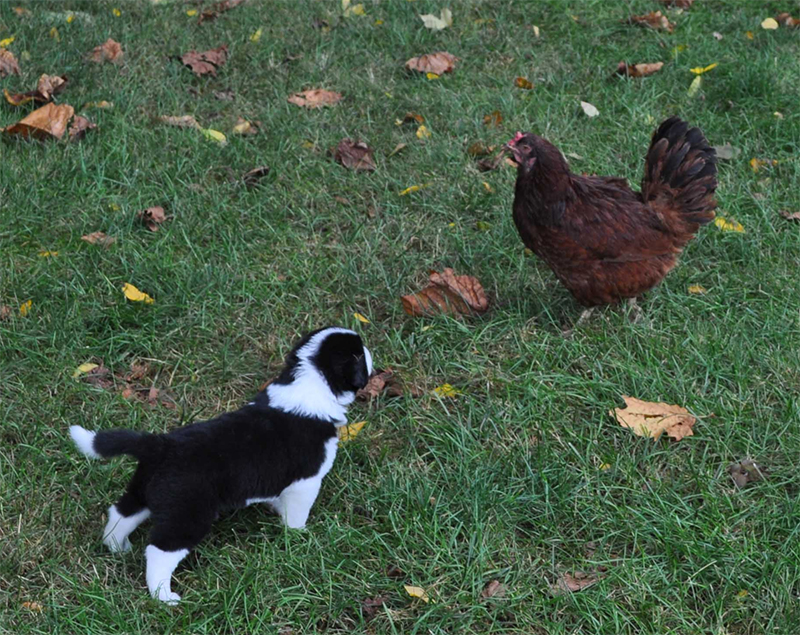 A puppy’s new owner has hopefully obtained a puppy from a breeder who has taken steps to ensure the litter has had every opportunity to be socialized to people as well as exposed to new environments. A good starting point for early socialization is for breeders to follow the rule of sevens* – by seven weeks a puppy should have walked on seven different surfaces (inside and outside), eaten from seven different dishes, eaten in seven different locations, been in seven different locations (front yard, back yard, etc.), played with seven different types of objects, met and played with seven new people (include older adults, males, females and children), been exposed to seven challenges (boxes, tunnels, steps, etc.) However, no matter how good of a start a breeder has given a puppy, if the new owner fails to continue to socialize a puppy during its later developmental periods (from six to twenty weeks) there may be a lasting, and negative, impact upon the dog’s future behavior.

Socialization involves getting the puppy accustomed to a variety of places, things, people, animals and activities. He needs to learn what is normal and acceptable and how to behave in public as well as at home. While getting a puppy out in new situations and to meet new people is very important, how this is accomplished is even more important. The experiences a puppy has during this formative stage of development should be positive so that the puppy learns that new things and people are not dangerous and scary. Therefore, a critical aspect of socialization is developing the relationship between the owner(s) and the puppy. Puppies need to trust that their owners will keep them safe from harm. There is no hard and fast rule regarding socialization and the process should take into account each individual puppy’s personality. What will be adequate exposure to new people and situations for one puppy may not be enough for another puppy, even one from the same litter.

In the past, owners were sometimes cautioned not to take their puppies out until the full series of vaccinations were complete, usually around 16 weeks of age. This can cause significant problems as the dog matures. Inadequate socialization to strange people and dogs, and lack of exposure to various environments and other stimuli often results in fear when faced with new people and different environments, an inability to adapt to new situations, an over-dependence upon the owners, and aggression when confronted with dogs or other animals. In fact, dogs are more likely to be turned in to shelters or euthanized for behavior problems linked to a lack of socialization than they are of contracting a communicable canine disease if common sense is utilized. Taking a puppy to locations where there is minimal probability of encountering unvaccinated or ill animals is relatively safe. There has been a growing trend among canine professionals to recognize the greater dangers of under-socialization and to recommend that puppy owners enroll in a puppy class after the first two sets of vaccinations have been given. 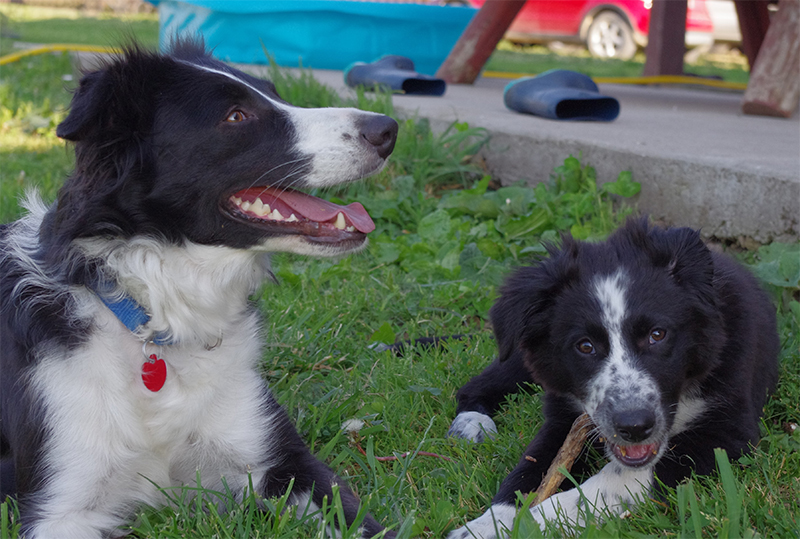 From six to twelve weeks a puppy will be curious about his environment. At this age he will start exploring his environment while staying close to his pack/family so that he is never far from safety. As the pack leader, the owner should encourage exploration while ensuring that nothing bad happens to the puppy. A puppy should not be forced into any situation that makes him extremely uncomfortable. Some puppies are bold while some prefer to hang back and watch a situation before getting involved. It is the owner’s responsibility to make sure that a puppy is not overwhelmed by its environment. This is also a perfect time to take advantage of a puppy’s natural inclination to stay close by beginning to teach walking on a loose lead and starting to instill a strong and immediate response to a “come” command.

As an all-purpose farm dog, the English Shepherd was bred to be able to handle a variety of tasks. A dog that is extremely sensitive and responsive to his environment may tend toward behaviors such as excessive barking or suspicion of strangers. While these traits might be advantageous for a working farm dog they are not desirable in a suburban pet. The amount of time and effort needed to socialize an English Shepherd in a suburban or city environment will, in general, be significantly higher than what would be necessary in a rural environment. In addition, the owner of an English Shepherd must be willing to invest the time to develop a relationship with their puppy based upon trust and respect. If an English Shepherd does not respect and trust its owner, all too often the dog will be rely on his own judgment and frequently will respond to people and situations in a socially unacceptable manner. 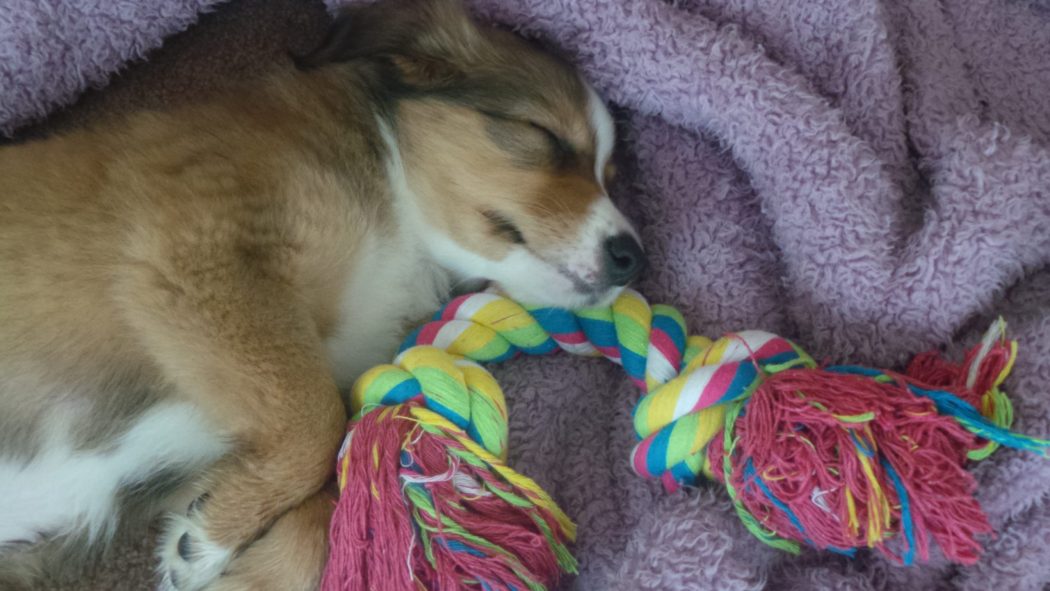 Socialization starts at home. When a puppy is brought into a home with another dog it is important to initially limit and supervise all interactions between the resident dog(s) and the puppy. A puppy’s emotional and physical needs should be satisfied by his owner and not by another dog in the household. A strong bond between a puppy and his owner should be created so that, given a choice, the puppy would prefer to spend time with his owner as opposed to another dog in the household. The puppy can later be allowed to spend more time, unsupervised, with the other dog(s).

Since dogs do not generalize well it is important for the owner to think ahead when socializing a puppy. A puppy should be socialized to children of all ages (with supervision), adults of both sexes and of different ethnic groups. (This includes exposing a puppy to people wearing a variety of different types of outer garments including hats.) Upon meeting new people the pup should be allowed to make the decision on when (or if) to approach a person. No one should be allowed to physically force their attention on a puppy (or dog.) If a puppy retreats behind his owner’s legs, the owner should let the puppy remain there while continuing to behave in a manner that tells the puppy that there isn’t a problem. The puppy should never be reassured or reinforced for fearful behavior but it also shouldn’t be corrected or punished.

When a puppy meets new dogs it is very important that the puppy be allowed to approach in a manner that conveys appropriate language to the older dog. When possible these introductions should be done off-leash in a secure environment. Not all dogs have good social skills and it is critical that a puppy not be exposed to dogs that do not have appropriate responses to the body language expressed by other dogs. A bad experience with another dog during this developmental stage may have a permanent impact upon a dog’s behavior around other dogs in the future.

Dogs need structure and boundaries. Behaviors which are cute in a small puppy are not as cute or acceptable in a larger dog. The owner must define and consistently enforce a set of rules to guide, control and support the dog. If the dog is naturally inclined to take charge, as many English Shepherds are, the dog will happily establish the rules for the pack if allowed to do so. His rules may not be acceptable to people. The dog may behave unacceptably when human members of the pack overstep his boundaries. Dogs that are not naturally inclined to make all the rules may exhibit stress and anxiety behaviors as they try to fill a role for which they are not suited.

Puppies should be provided with boundaries as soon as they are brought into a new home. A good leader is going to provide structure and rules for all pack members and will enforce those rules fairly and consistently. A puppy should also be able to trust that his pack leader is going to keep him safe. A puppy that has a good leader is not put into positions where the puppy has to make decisions on how to behave.