How Hip Soundness Measures Can Collide, with Implications for the ES Breed

By Jan Hilborn
Originally published in the ESC newsletter in 2005

The English Shepherd is a remarkably sound and healthy breed. Though there are scattered reports of a few health problems, the only serious and prevalent one is canine hip dysplasia. Breeders and owners want to know more about this condition and how we can address it.

First off, let me say I’m in favor of all English Shepherds, not just breeding dogs, having their hips x-rayed as a measure of soundness to create a larger pool of evaluated dogs. At the same time, it’s not as simple as we might think to create sound hips in the breed by requiring all ES dogs to be evaluated. We want to encourage selection for soundness while avoiding a loss of genetic diversity. Let me play devil’s advocate as I describe the situation.

Canine Hip Dysplasia (CHD) is an inherited condition in which developmental deformity and excessive looseness of the hip joint causes joint damage and arthritis. The disease is found in a gradation of effects, from dogs that have little joint impairment, to those that have a gradual deterioration of the joint, to those that are severely affected early in life. This spectrum can lead breeders to believe that their dogs are not affected because they move normally, when in fact an x-ray might show them to be dysplastic.

Relatively few ES dogs have been screened for hip dysplasia. Just under 60 are in the PennHIP database and about 150 have been OFA evaluated so far (2004); this is too small a percentage to make any definitive statements about its prevalence, though it is clear that this problem is not confined to one or two lines.

There are two ways that dogs’ hips are evaluated: the Orthopedic Foundation for Animals (OFA) and the University of Pennsylvania Hip Improvement Project (PennHIP). OFA uses a single x-ray to look at the shape of the hip joint, both the ball and socket, how well the two fit together and signs of degenerative joint disease. This evaluation is recommended to be done at two years of age or older when the dog is structurally mature, though preliminary evaluations can be done earlier. OFA maintains a registry certifying dogs that are found free of hip dysplasia at age 2 or older.

PennHIP is a program that analyzes the amount of laxity (or looseness) present in a dog’s hips as well as screening for signs of degenerative joint disease. Dogs evaluated by PennHIP are not certified but instead receive a score, called a “distraction index,” or DI, measuring their hip laxity. The looser or more lax the hips, the higher the DI score; tighter hips and lower scores are preferred. DI scores are on a scale of 0.0 to 1.0. The closer the score is to 0, the better. PennHIP suggests that dogs with scores 0.30 and lower are unlikely to ever develop CHD, while dogs with scores 0.70 and higher are much more likely to. When a dog is PennHIP’d, the owner receives the numeric score plus a dog’s percentile rating compared to all the other dogs of that breed measured so far, plus the current median rating for the breed. PennHIP shows signs of degenerative joint disease, and a “DJD” on the PennHIP paperwork means that the dog has CHD. An advantage of PennHip is that it can be done at a younger age; disadvantages are that it is not as widely available as OFA and is about twice as expensive.

CHD in the English Shepherd

So this seems straightforward: get dogs evaluated by either OFA or PennHIP, use the ones with the best scores, and get on with life. But check out the sample data from ES on this web page. This is my attempt to try to figure out PennHIP scores as they relate to OFA ratings within the English Shepherd breed. Passing OFA ratings are publicly available and the information on scores of ES evaluated by OFA is online here.

It is important to note that PennHIP scores and non-passing OFA scores are confidential so the information available to the ESC is available entirely thanks to the owners of the dogs listed. I applaud their dedication to the improvement of the breed by sharing this info.

I will use my dog Toasty as an example. Two years ago his PennHIP scores of 0.46 / 0.43 put him in the 80th percentile for the breed and the median for the breed was about 0.67. This is not a great median for a breed, since it means a lot of PennHIP’d English Shepherds are somewhere on the wrong side of that 0.70 score.

PennHIP suggests that breeders use dogs with lower scores as a way to bring the breed median score down. If this were to happen, perhaps in 10 years, with a few generations and many more ES dogs measured, the median score might be 0.50 and Toasty’s 0.46 / 0.43 could be refigured to put him in the 70th or 60th percentile. PennHIP scores would be the same but his ratings compared to the breed would gradually change as the overall hip health of the breed improved.

Go back to the data from ES on this web page. This is a small sample, but it’s clear that the two methods don’t agree on what is “radiographically sound.” Again I’ll use one of my dogs as an example. My Cally OFA’d Mild and received PennHIP DI’s of 0.61/0.47. According to OFA, her hips are not radiographically sound, while according to PennHIP her hips are better than the median and show no signs of DJD. With Cally as a starting point, no matter which method you choose, even this small sample will show you dogs with better or worse hips per one method who got the opposite opinion from the other.

Some breeders use one method, some another. Some use both and only release or admit to the scores they like, or they use the general confusion about the two methods to “equate” one score with another – for example, I could use Cally’s 0.47 score in one hip to equate to Toasty’s 0.46 and claim to puppy buyers that Cally’s PennHIP scores mean she’s as good as an OFA Good. I might do this out of genuine ignorance or out of calculated deceitfulness, but I’d be seriously misleading my puppy buyers either way. Sorry if I sound paranoid or suspicious, but unfortunately I don’t make this stuff up, and it doesn’t just happen with other breeds.

However, because of the complicated inheritance of hip structure and soundness, my radiographically sound breeding is still a gamble because I know nothing about Lady’s line and very little about Toasty’s. With hips, the radiographic soundness of the whole line – that is, parents, siblings, aunts, uncles, and previous pups – is nearly as important a consideration as the soundness of the breeding pair. If Lady was the lone fantastic dog in her line of otherwise mediocre dogs, then her pups will more likely inherit mediocre hips than her above average ones. On the other hand, she could be average from a great line, so this is strictly hypothetical, and I hope to discover that Lady’s pups inherit her great hips. 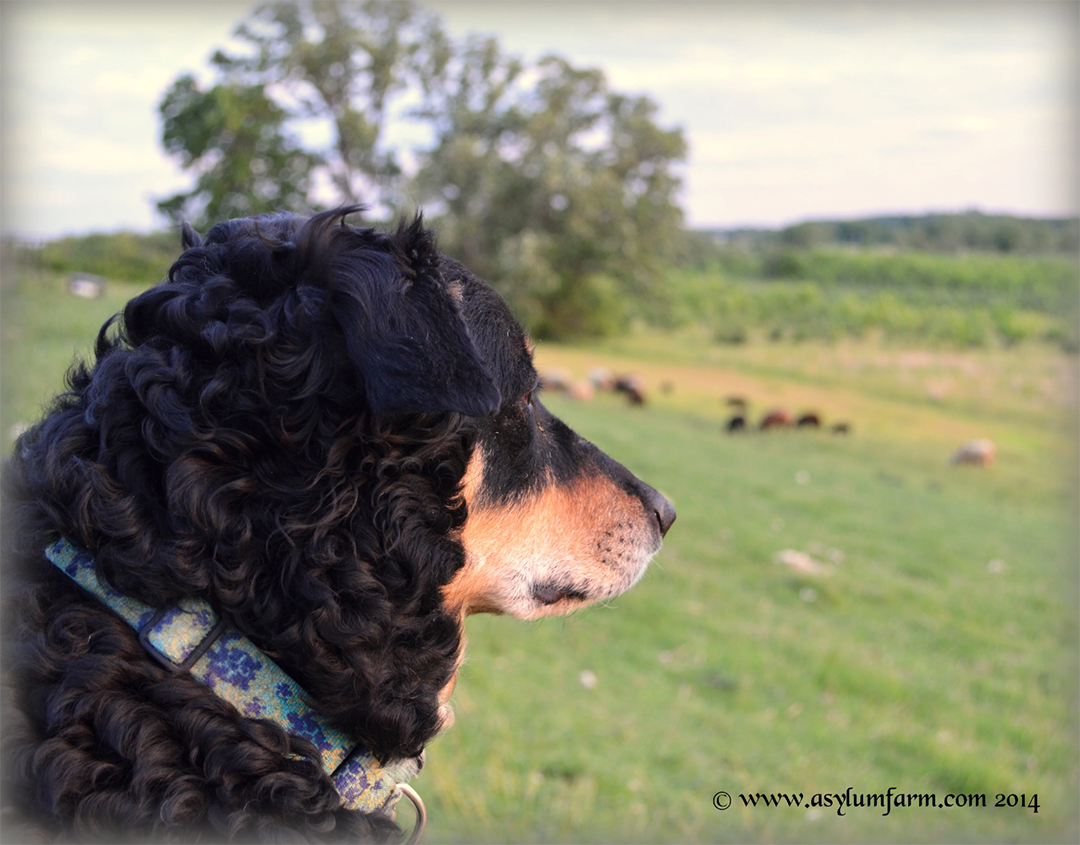 X-raying my dogs is a good first step, but only if all (or most) of my puppy buyers also x-ray their pups will I start to have some idea of the actual structural soundness of my line. It’s either that or tracking down all the other relatives and getting hip information on them.

Radiographic soundness, as determined by either method, is most often discussed in reference to breeding stock, but it’s important that we understand what its strengths and limitations are. Breeding dogs may get good scores from OFA or PennHIP and still produce pups with some hip problems. At this point, what we need is a bigger baseline of dogs – not just breeding stock but all ES dogs with pedigrees to create a baseline from which we can understand the extent and nature of the problem. That is a first step.

ES owners can make an important contribution to this work by having their dogs screened and results submitted to the health and genetics committee with pedigrees. ES breeders should screen their breeding stock, taking care to study the families of their dogs as much as possible so that the breedings are designed to increase the chances for sound hips in an overall sound litter.

For now we have to live with the fact that PennHIP and OFA results aren’t exactly equivalent. I hope that doesn’t discourage anyone from at least doing one or another type evaluation. Some breeders are doing both. Either method will be helpful to the breed because both provide the most basic screening necessary: to find out if the dog has hip joint deformity or arthritis that can’t be detected except by x-ray. PennHIP and OFA both do a standard evaluation for presence of degenerative joint disease by looking at the hip extended x-ray view so they can be assumed to basically agree on whether a dog actually has arthritis or not at the time the evaluation. But beyond that, PennHIP and OFA results can’t be simply equated with one another; a certain PennHIP DI score doesn’t mean that the dog would have a certain OFA grade, and a certain OFA grade doesn’t mean the dog would have a certain DI. Everyone needs to know that so we don’t mislead one another or ourselves.

If a dog owner tells you their dog’s hips have been screened, they should be willing to show you the official paperwork, otherwise there is room for misreporting of the data, whether due to honest misunderstanding or dishonest misrepresentation. The only way to be sure you have been given the full results of either type of evaluation is to see the complete evaluation result form provided by the evaluating organization.

This article was written near the end of 2004. Since then, more ES have been tested. As of August 2015, 370 ES have been OFA evaluated with recorded scores in their open database. As of June 2015, the PennHIP breed median was 0.46, which is based on 334 ES within their closed database.