The best answer to this question can be found in a document I recently composed for a code of ethics:

PennHIP protocol in the screening and selection of breeding dogs:

The PennHIP evaluation is a useful clinical screening tool for hip dysplasia in the selection of breeding dogs, and can be performed as early as 16 weeks of age. Dogs with a DI of < 0.3 are essentially considered unsusceptible to hip dysplasia, whereas dogs having DI measurements of >0.3 are considered hip dysplasia susceptible. The larger the DI (ie. the more the laxity in the hip), the more the risk for the development of osteoarthritis. To make genetic change, it is recommended to breed dogs in the 60-100th percentiles relative to their generation and breed, (i.e., the top 40%). This strategy will systematically select against the laxity genes which result in hip dysplasia development. By following this ‘moderate breeding strategy’ the threshold for breeding in successive generations will get tighter and tighter. Of course if more rapid genetic improvement is desired, breeders may opt to mate only the very tightest members within a generation and breed (say the tightest 10%). That these strategies will actually work in the real world has foundation in the works of Falconer who authored a comprehensive book of quantitative genetics (Falconer, D.S. Introduction to Quantitative Genetics, 3rd ed.).

Hip dysplasia is a developmental disease. Dogs are born with normal hip congruity, but if genetically predisposed, with growth develop varying degrees of hip laxity associated with hip dysplasia. The timing for the development of hip laxity appears to vary by breed and like your serum cholesterol, there is some individual variation over time. Research has shown that the degree of laxity variation diminishes substantially after 1 year of age. In other words, there is greater possible change in measured hip laxity within a given dog in the interval between 16 weeks and 2 years of age than between 1 year and 2 years of age. Nevertheless, DI at 16 weeks is still a good predictor of later joint laxity; just not as good as at 1 year of age. One needs to remember that in comparison to the hip extended method (and the OFA interpretation there from) the PennHIP scores have much less variation over these same time intervals. While not perfect, PennHIP is the most accurate and precise measure of hip integrity.

Because some degree of biological variation in score is inevitable, PennHIP recommends evaluation at 16 weeks for an initial assessment of hip laxity, and that all dogs be evaluated at a later date preferably at 1 year of age or older. Particularly for dogs in the tighter half of the breed there is added emphasis on re-evaluation because such dogs have the potential to be used for breeding and it is important to confirm the previous prediction. If only one PennHIP evaluation can be performed, dogs should be evaluated at 1 year of age or older, although it is recommended to monitor the status of hip dysplasia with PennHIP throughout life. Follow up radiographs are essential to determine the relationship of hip score to the later development of osteoarthritis in each breed (see graph below, from: Evaluation of risk factors for degenerative joint disease associated with hip dysplasia in German Shepherd Dogs, Golden Retrievers, Labrador Retrievers and Rottweilers. JAVMA 219(12): 2001). If you would like to have similar graphic information for your specific breed, we ask that as a breeder you provide PennHIP with the necessary hip information by evaluating dogs well into adulthood. The graphs below represent thousands of dogs from each breed. 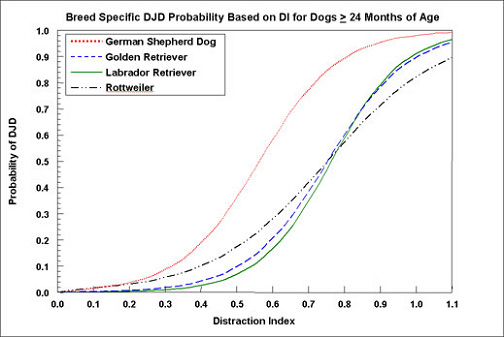