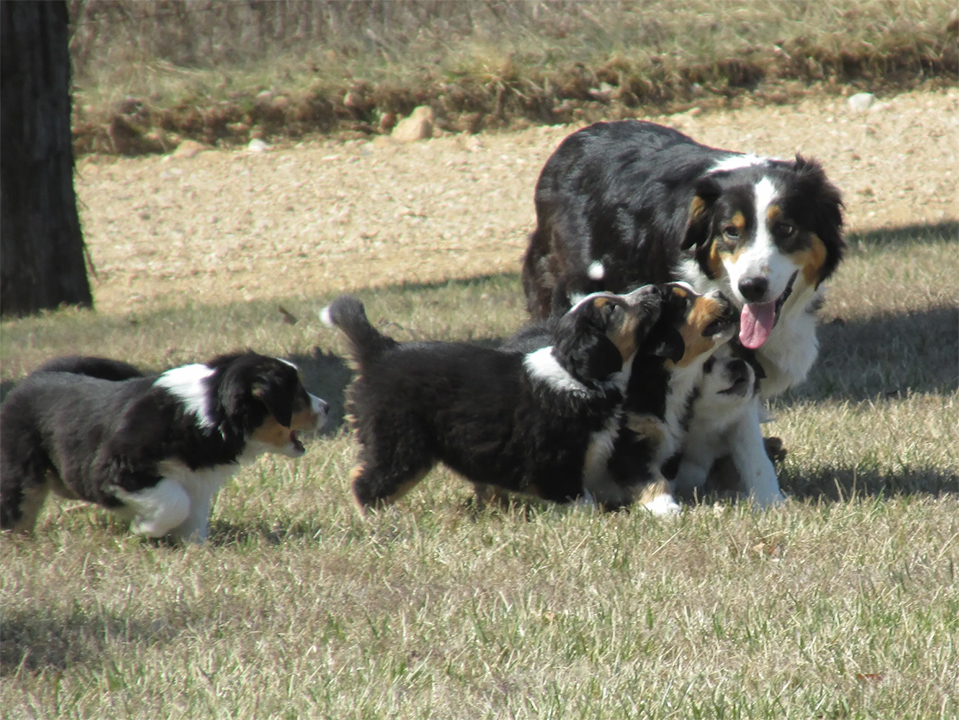 I attended a daylong canine breeder symposium at the North Carolina State University Veterinary School, sponsored by the Theriogenology department in 2012.  One of the vets kept expressing in his talk that even though the book always says things should happen a certain way, very little in real life actually follows the textbook.   I don’t know about the other breeders who were in attendance, but that little bit of information actually made the day for me.  There have times that I have felt that something must be wrong with my dogs because they weren’t textbook at all!  The one thing that I have taken away from all my experiences, research and talking with other breeders, plus vets in the know, is that one must always be prepared for the unexpected, because our dogs don’t read the same books we do.

The books tend to state that most females will go through two cycles per year or three cycles within two years.  It is also generally understood that females usually have their first heat cycle sometime between 6 months and 12 months of age.  In reality, English Shepherd females can vary greatly not only in their cycle length but also at what age the first heat cycle begins.  It is a good idea to talk with your female’s breeder and other breeders who own close relatives to see what sort of cycles they have experienced.

My older female Bec had her first cycle at around 9 months of age and then cycled regularly around every 8 months, unless it was the cycle following a litter of pups.  That cycle was always an extra month longer.  Kira never followed the book.  She was almost 15 months old before she had her first cycle.  The next cycle was 11 months, followed by a 10-month cycle, and then she finally settled into an 8-month cycle.  She also had three littermates with completely different time schedules for the first cycle. They ranged from 6 months in age up to 11 months.  Kira was the only one of the four that waited until after a year in age.  I did find out that it was not uncommon for females within her line to be later to cycle in the first time.  Her daughter Holly had her first cycle at 11 months, followed by several 8-month cycles, and has now gone to an 11-month cycle.

If you are thinking in terms of breeding your female, I would suggest that you maintain some sort of records on when she begins her cycles, how long they last and when she is in standing heat, her most receptive part of the breeding cycle.  This will help you determine what sort of pattern she has.  I use a wall calendar to record this information and keep these old calendars for reference.

Also, I would encourage you to be diligent in checking your female to determine when she actually does cycle in.  If you are waiting for that first drop of blood to hit the floor, you may have already missed several days of her cycle.  Some females are very conscientious about keeping themselves clean.  Only by physically checking her on a weekly or sometimes daily basis will you know when the cycle begins.  If you notice swelling but no blood, it is recommended that you do a blot test with a tissue to see if she has begun bleeding but is keeping herself clean.

For some breeders, it is very important to know when their female is ready to be bred since they do not own the male.  Getting to the male’s house may involve a 30-minute trip, a two-day trip or even shipping their female to the other side of the US.  In some instances, having access to your female’s previous heat cycle records will be all that you need to make the decision on when to make the trip.  In other cases, knowing exactly when she ovulates will be key.  The most precise and reliable way to determine her ovulation date is by having multiple progesterone tests performed.  If you are planning on having an Artificial Insemination (AI) done, then the progesterone tests will be necessary to determine the best date(s) for the AI to be conducted.

When a female dog ovulates, the eggs are released in an immature state.  It will take another couple of days for the eggs to mature and be ready for fertilization.  Most of the time, the female has entered the standing heat stage of her cycle prior to ovulation.  On average, fresh sperm have a lifespan of up to 7 days, though sometimes they can live longer.  So there are a lot of variables to take into consideration on when to breed.  For a natural breeding, the general rule of thumb in the books seems to be that she would be bred as soon as she was willing to stand for a male and then every couple of days for a total of 2-3 breedings.  Some folks breed the female around the 11th day of her cycle, which would be pretty close to the ovulation date, and then for several days in a row or every other day.

The best way to determine pregnancy is to wait and see, but most of us aren’t that patient!  Some early signs that you can look for include:

Tests that can be done to determine pregnancy include:

It is recommended that you do not increase the amount of food given to your female until around 6 weeks into the pregnancy.  If you feed two meals a day, add a small third meal, or if you feed once a day, add a second meal in the evening.  Some breeders will switch their female over to puppy food at this point.  A recommended food analysis would be for the food to contain 30% protein, 18% fat and 20-30% carbohydrates.  Also, foods rich in calcium should not be added to her diet prior to delivery.  This can cause some issues during delivery.  Save the cheese and other calcium-rich food toppings for after the puppies arrive.

Getting ready for delivery

It is stated within a number of books that the length of a pregnancy is exactly 63 days from ovulation, no buts, ifs or maybes.  This is great information if you have done all the progesterone tests and know exactly when ovulation occurred, but most of us do not have access to that date.  I will state from personal experience that even if you do know the date of ovulation, there are things that can affect when delivery will take place.  If there are only one or two puppies in the litter, she may go one to two days longer than the expected 63 days.  If there is a larger litter than she is accustomed to carrying, she may go earlier.

About a week and a half prior to the expected delivery date, it is a good idea to check your female’s temperature on a daily basis.  I tend to use an ear thermometer since it is easy to use.  Mine is an actual dog ear thermometer, but others have had good results using a child’s ear thermometer.  The normal temperature for a dog is around 102 degrees.  Pregnant females tend to run around 100 to 101 degrees.  The closer your female gets to her delivery date, the lower her temperature will drop.  As you check her temperature, you will begin to see the steady drop from 101 down to 99 degrees.  Once it gets below 100 degrees, I tend to check twice a day.  The temperature may fluctuate back up and down several days, but when it really drops, say down to 98 or 97 degrees and stays low, then you can pretty much expect delivery within the next 24 hours or so.  I know that the ear thermometers are not as accurate as a rectum one, but for me it is easier to use, plus I can still see the drop in temperature on the day it occurs.

The whelping pen needs to be set up a week or so ahead of the expected due date.  Use this time to assemble your whelping supplies.  I have tried to list a number of things that I always make sure are nearby.  You can use this list as a starting point for your own supply list.